Calculating the original number after a percentage increase

If you’ve arrived at this page it is likely that you are working in a sales environment. For that reason I’ll start this article with a brief explanation of Gross Profit and Markup (excerpted from my Expert Skills book).

Here’s an example of mark up:

The Excel formula that could be used is:

If you use Excel’s percentage format a value of 50% is stored by Excel as 0.5. For this reason you could use the following formula (which is exactly the same).

And you could also do this.

All four formulas are doing exactly the same thing. (The percentage format has the potential to cause great confusion amongst Excel beginners).

Here’s an example of Gross Profit:

In this example, the formula is:

The Excel formula that would be used for this example is.

In this example that would result in a selling price of $200.

Terminology
I use the terms Gross Profit when discussing both cash amounts and percentages.

Calculating the original number after a percentage increase

The problem you are probably struggling with is this:

Many student’s first instinct is to reduce the selling price by 50% and use the formula:

Of course that results in $325 which is the wrong answer (though it would be the right answer if 50% was the gross profit percentage rather than a mark-up percentage).

Let’s look again at the formula Bob used to calculate his selling price:

Bob had multiplied the cost price by (1+50%) to arrive at his selling price.

This means that the selling price of the watch is now 150% of the cost price. To return to the cost price you’d have to multiply by 100/150.

The formula that is needed is thus:

In the example of Bob’s watch the Excel formula would be:

In the simple example above rounding isn’t an issue. When you work with real-world data rounding can become an issue. Consider this calculation:

Excel’s ROUND function can solve this.

Here’s a formula you could use to solve the problem above. 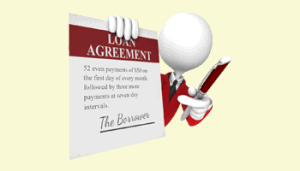 This article shows how to calculate loan payment dates in Excel, using a formula that can calculate loans of any length and number of periods. 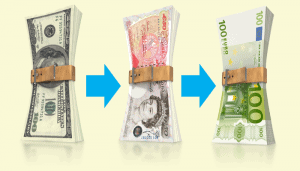 This article shows you how to change currency symbols in Excel, how to convert from one currency to another and how to get exchange rate data online. 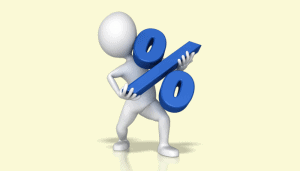 This article explains how Excel handles percentages and shows you how to subtract a percentage from a number in Excel using two different methods.