If you are learning Excel for the first time our recommendation is clear:  Use Excel 365.  This is the latest and greatest version of Excel and there’s even a 30-day free trial version that will provide enough time to learn.  If you need longer access, Microsoft will provide Office 365 personal to you for less than six dollars a month.  If you don’t like the idea of a subscription Excel 2019 would be our second choice.  If you master Excel 365 (or Excel 2019) you’ll still be able to use the old versions – they just won’t have as many features.

The video courses for Excel 2007, 2010 and 2013 were published on a different web site (ExcelCentral.com) during their lifetime.  The old ExcelCentral.com site no longer exists – it was taken down after a twelve month notice period after the Excel 2013 version was retired by Microsoft. This domain now forwards users directly to TheSmartMethod.com.

Due to the fast-moving continuous update cycle used by Microsoft since 2016 (with major updates every six months) it is no longer useful to produce Excel video courses (as they are always out of date and hence confusing to follow). Instead we produce a new edition of our Excel 365 books every six months to coincide with each new Excel 365 release.

If you purchased a legacy video course from this site in 2019  and you are logged in you’ll find all of the video lessons will appear when you click the relevant button below.

If you have a slow Internet connection the page may take a few seconds to appear. 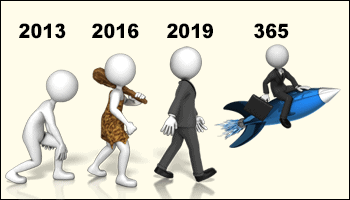 Because Office 2007 no longer receives security updates it is a bad idea to use it today.  It is still safe to use Office 2010 as this product does not reach the end of its life until October 13 2020.

Copyright 2019 © All rights Reserved. Design by The Smart Method